With reparative therapy now in the media spotlight, here's an inside look at one gay man's first-hand experience with an ex-gay program.

The mainstream media - including CNN's Paula Zahn and ABC's Diane Sawyer - are paying close attention to ex-gay programs like "Love in Action" due to the imminent release of teen Zach Stark from a facility in Tennessee. With reparative therapy - which both the American Medical Association and the American Psychiatric Association say does not work - now in the media spotlight, here's an inside look at one gay man's first-hand experience with an ex-gay program (to protect the identity of individuals connected to the story, he's asked to remain anonymous).

I came out at an ex-gay ministry meeting. 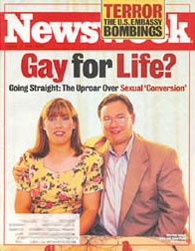 Featured on the cover of Newsweek in August 1998, John Paulk was board chair of the umbrella ex-gay Christian group Exodus International when he was ejected from the board in Oct 2000 - several weeks after he was photographed in a popular gay bar in Washington D.C. His defence was that his only intention was to use the bathroom.
You know, one of those groups (very similar to "Love in Action") that promise to help gays "recover" from their homosexuality and become "normal" again.

Of course, I've always felt normal. So what if I loved MGM musicals and knew every line in Whatever Happened to Baby Jane?, right? To me, that was normal. But I equated approval with oxygen, so I kept such things to myself for years. I played the nice guy - the funny, gregarious and likeable guy. But no one knew the real me. To survive, I censored my authentic self.

Now, of course, surrounded by my wonderful friends and the freedom of New York City, being out is no big deal. Today, I'm just another person, not a label or stereotype - something I only could fantasise about before. But I'd never actually shared my unusual coming out story with my friends until recently, and was unprepared for the tremors it caused. "You did what?" said my friend Sally, as wide-eyed and stunned as the rest when told the unsettling news. "No you di'int!"

But I did, Sally, I did. Telling my friends - and seeing the look of shock on their faces - brought the experience back into sharp focus. Now, inspired with the hope that my story might actually help others, and in response to the ridiculous media reports that programs like "Love in Action" can make you straight, I've decided to share it.

The year was 1992 - obviously pre-Will & Grace, Queer Eye and let's not forget Ellen. I was a 20-something self-styled hipster (or at least I like to think so) with a cool media job in a conservative city in Florida. I lived in a spacious house near the beach, traveled widely and had money in the bank. On paper, it was my dream, one I'd worked hard for.

I always knew I was gay, and as I got older it became more difficult to stay in the closet, without the love and support of people who really knew me. Each day brought a feeling of isolation, and I grew more unequivocally desperate. I was having anxiety attacks when I wasn't darkly depressed, my only salve being my fantasies - and Joni Mitchell. I was dying of loneliness. No wonder lesbian and gay folks are at a greater risk for depression and anxiety - according to numerous studies - not to mention suicide.

So why didn't I just move to New York City or San Francisco and come out, you ask? Even though I was suffering, I wasn't yet ready to give up the life I'd worked so hard to build. And why should I have to? But with no gay role model - someone who was out and maybe even proud (is that too much to ask?) - I was lost, and didn't realise how much harm I was doing to myself by hiding. Times were very different: George Michael was still pretending to be straight and Bush Sr. was still president. There were no circuit parties, gay gyms or hip vodka ads trumpeting a suitable gay existence.

So what better time to try an Episcopal church-sponsored ex-gay ministry, right? I really thought that the solution to my problem wasn't coming out, or moving, or finding new friends. I thought being straight would solve all of my problems. My therapist (a nice, albeit clueless woman who I chose from the yellow pages because she took my insurance) had actually suggested it.

Not only was there potential to get "fixed," but I was also drawn to the idea because an ex-gay group would be filled with, well, gay men, and at least I could talk honestly - even shed a tear - with people who would understand what I was going through. What sweet relief! But it would come at a major price. For starters, I hated the idea of "recovering" from who I was, like getting over an illness or disease. I wanted the support of a group of people who were like me, and I wanted to recover from the pain and isolation of hatred and homophobia, and a tiny part of me thought it would actually work.

So I mustered up the courage to drive to the meeting, held in a seedy but historical section downtown, in the city's oldest church. I sat in the parking lot, unable to move. I was sweating and nauseous; I wanted to flee.

Only about five or six other guys showed up to the meeting, but to me that was monumental. The meeting room seemed dark and depressing; the tension and shame in the air were suffocating. But that night, I uttered the words "I am gay" for the first time. I also talked openly about my feelings. Going to that meeting marked my first step toward freedom, no matter how fucked up the circumstances.

My unconventional coming out party went on for almost a year - days and weeks and months of 12-step meetings ("I admit that I'm powerless over my homosexuality..."), Friday night support groups (held so we wouldn't get tempted by local gay bars), and humiliating sing-a-longs ("Amazing Grace" was our anthem) surrounded by myriad married couples.

But what I'd hoped would help me connect with my true self, and with God, had the opposite affect: I had never felt lonelier, and I was darkly depressed. My soul felt dead, and so did I. My innate joy was buried in shame every day. I hated myself more than ever.

To contain my urge to be playful and camp it up, I instead wore a perpetual mask of gloom. If I was tempted to hit a bar, I called to chat with my 'sponsor' instead. We all added up the days since our last trip to a bar or hook up, and announced it at each meeting; instead of feeling proud, I felt punished, like Martha Stewart must have felt whiling away her days in Alderson.

Finally, something happened that changed everything for me. Completely by accident, our long-time group leader - a minister's son no less - was spotted having a gay old time with a shirtless pal in a nearby city (I'll spare you the details). In gay recovery circles, this is called a "slip" my friends, kind of like an AA member downing an entire bottle of Kettle One.

That was it. No more meetings. No more pretending. I was done.

After all, what was this accomplishing? I'd never felt less connected to God in my life. And I wasn't the only one who left the organisation for good. The word spread like wildfire. It was like we all saw the light. Ironically, the religious and spiritual experience I was searching for had finally happened. I felt the truth:

There was nothing wrong with me.

Of course, because we had all endured this painful attempt to excavate our straight selves, many of us also bonded. In fact, lots of late night coffees fuelled an intimacy that I find all too rare in today's gay community.

Sex was off-limits, so we actually got to know and accept each other as people (imagine that!). Instead of worrying about who had the lowest body fat percentages or the best jobs, we just really got to know and care for one another. In fact, I'm still friends with several of the guys from that group to this day; and yes, they're gay, and happily so. Some are even in long-term committed relationships.

My unsolicited advice, if you're struggling with merging your sexuality and spirituality? Lighten up on yourself as a first step. Self-acceptance is an incredibly powerful, and immediate, healer. Ultimately, that's all I needed to finally connect with life (and in my opinion, with God).

So don't let anyone tell you there's something wrong with you. Not ever!

Despite the crazies on the far right, much of society is evolved and accepting these days - and if they're not, screw them - and just let the rest happen naturally.

Trust me, I wish I'd have done exactly that right from the beginning.
ex-gay, john, paulk, reparative, therapy