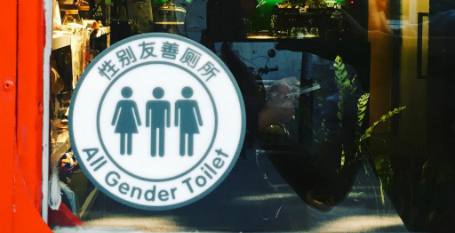 It's been about 4 months since a progressive program has added more than 20 all-gender bathrooms in one of the most populous cities in the world.  Why haven't we heard any fallout?  Shouldn't the addition of such a controversial space rustle some feathers and some hatred?

"Since the program’s launch in late May more than 20 Beijing venues have introduced all-gender toilets.  The program was initiated by Martin Yang, who works at Beijing Gender Health Education Institute (BGHEI). The bathrooms have been introduced in bars, cafes as well as an international school and Beijing’s U.N. Women office.

Each establishment joining the program receives an ‘all gender toilet’ label for the door, certification from the program and is included on BGHEI’s digital map of trans-friendly places.

Adam’s, a prominent gay bar in Beijing’s trendy Sanlitun neighbourhood, was among one of the latest to adopt an all-gender lavatory.

Yang was prompted to act after a transgender friend was ejected from a women’s restroom. ”Our main goal with this project is to raise public awareness about gender diversity and equality issues,” Yang said.

Other LGBT activists in China have welcomed the move. There are signs that attitudes to transgender are changing in the country and reassignment surgery can be found in places like Shanghai. Traditional attitudes prevail, however, and transgender people are still diagnosed as mentally ill under the Chinese Classification of Mental Disorders." - fridae.asia

Is there such a program in the United States?  I think the closest thing we have is what Target has promised to do with all of its stores and we know the backlash that has had, protestors yelling in the stores and a supposed economic downturn for the company due to people boycotting because of its bathroom policy.

Even though, this program in Beijing is great, there is a lot more to do in China for Transgenger rights and health.

"While Saito is pleased with the progress achieved thus far by the all gender toilet project, he is under no illusions about China leading the international charge for trans rights. For instance, despite the relatively easy access to Sex Reassignment Surgery (SRS) now available at a well-reputed public hospital in Shanghai, other regressive policies still abound.

Chief among them is how transgender people continue to be diagnosed as mentally ill under the Chinese Classification of Mental Disorders. In addition, Saito remains concerned about the lack of ready access to quality hormone therapy. He describes a Chinese testosterone treatment that can only be purchased at one hospital, which is, shockingly, tainted with chemicals that have led to drastic side effects like hair loss, oily skin, and weight gain. This subpar hormone’s desired effects, on the other hand, like voice deepening and the ceasing of the menstrual cycle, are far slower to take hold in comparison to its American counterparts." - readrice.co