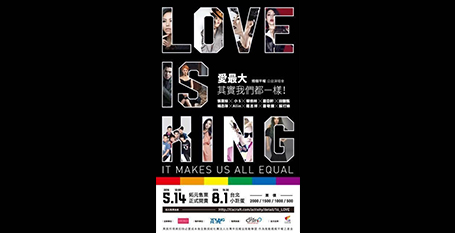 Concert for same-sex marriage in Taipei

Nine Taiwanese singers and a band led by pop diva A-mei will perform at the Taipei Arena on August 1, promotional firm Tian Di He Entertainment Co said on Tuesday.

Profits from the event, which is named Love is King, will be promoted to the Taiwan Alliance to Promote Civil Partnership Rights.

The group helped to propose an amendment to the Civil Code that would allow gay marriage. The amendment cleared a first reading in the Legislative Yuan in 2013, but has since then stalled.

This month sees a new president of Taiwan, Tsai Ing-wen. The leader of the DPP expressed support for same-sex marriage during her campaign but it is unclear if she will be able to push the same-sex amendment through the legislative Yuan.