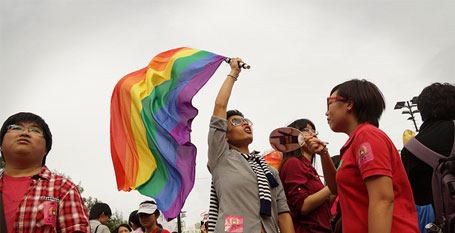 How hard should you lobby for equality and how quickly should you expect attitudes to change? Two of Hong Kong's most important advocates of equality for LGBT people, York Chow Yat-ngok and Professor Fanny Cheung Miu-ching, have differing approaches. Fridae's Hong Kong correspondent Nigel Collett reports.

How fast should you expect change and how hard should you push? Advocates of equality and protection for sexual minorities in Hong Kong are well aware they need to consider this question. They may often come across as impatient for change, and small wonder if they do, for they have been waiting a long time, but they know that if change is to happen it must be with the consent, explicit or tacit, of the majority. They need to carry with them the moderate center that may be unaware, confused orsimply uninterested in this issue. Push too hard and you risk alienating those whose support you need. Don’t push hard enough and change won’t happen. It is a delicate balance the stakeholders are trying to come to grips with at present.

Two figures in Hong Kong’s establishment have crucial roles to play at the moment and they have different approaches that illustrate this dilemma. York Chow Yat-ngok, the Chairman of the Equal Opportunities Commission, has emerged as an advocate of swift change. He is adamant that equality for lesbian, gay, bisexual and transgender (LGBT) people is a human right, and has struck out recently as a lone voice calling for some form of legally recognized same-sex partnership. He believes Hong Kong has a duty to its LGBT citizens, and although he is realistic enough to realize that the introduction of measures to protect sexual minorities and to give them equal standing before the law will not happen immediately, he nevertheless seeks to commit resources to push the Hong Kong government to lead public opinion and act swiftly. 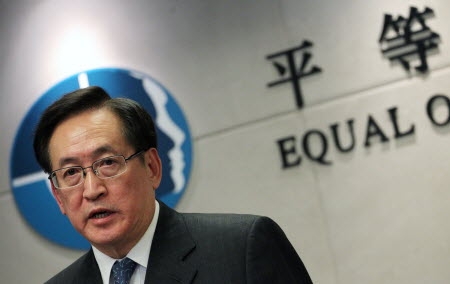 Professor Fanny Cheung Miu-ching was appointed this year as Chairwoman of the Advisory Group on Eliminating Discrimination against Sexual Minorities, and she has a different view. The advisory group has been tasked with recommending, by mid-2015, the way Hong Kong should deal with LGBT discrimination. She brings a psychological perspective to bear, not surprisingly as she is pro-vice chancellor and chairwoman of the Department of Psychology at the Chinese University of Hong Kong. She has been teaching there since 1977 and founded its Gender Research Program in 1985. She was the founding chairwoman of Hong Kong’s Equal Opportunities Commission and held that post from 1996-1999.

Professor Cheung believes that although Hong Kong decriminalized homosexuality in 1991, its public attitudes towards LGBT people have been slow to change. Few gay men or lesbians have been brave enough to come out publicly so far, especially in the upper ranks of society, so most people can still claim that they do not know any LGBT people and have never considered their needs. She believes the public must be educated to change what she sees as its emotional reactions to the issue, and that this cannot just be done “cognitively”, as she puts it (that is, just by lecturing the public on principles and rights) but has to be done “experientially”, by showing the public what discrimination is actually occurring here now and what damage it does. Legislation alone, she would say, will not be sufficient.

Professor Cheung believes that a process of what she describes as “conscientization” is required. Homosexuality being such an unavoidably emotive subject, people’s minds must be changed. She has set her advisory group on the first step in this process, ordering research to collect evidence about how exactly discrimination occurs in Hong Kong, what effect it has on LGBT people, what they need and what they want. An academic group has been appointed to run this study and will report later in the year. From that, the advisory group will know where to go next, although it will not wait to put forward suggestions for other measures, such as educational programs, which can be commenced simultaneously.

Both Chow and Cheung accept that, whatever their motivation, the concerns of religious groups in the community have to be addressed. Some Christians fear losing their freedoms if legislation against discrimination is enacted, so both the EOC and the Advisory Group intend studying foreign legislation to see how these issues may be best handled.

Same-sex unions have already been made a subject of public debate by the chairman of the EOC, but they are not in the remit of the advisory group. Marriage per se is, for Cheung, not yet appropriate for Hong Kong; as she felt it was still a very emotional concept.

Implementation of human rights soon, then, for Chow; no rapid revolution, but steady incremental change, for Cheung.

Two different approaches, but to one end. We shall know within the next two years which path Hong Kong will follow.

Nigel Collett is Fridae's Hong Kong correspondent. In 2008 he was appointed English secretary of the Pink Alliance, Hong Kong's largest grouping of LGBT organizations and he remains prominent in LGBT activism in that post. He was a founder in 2011 of Hong Kong's Pink Season, the annual celebration of LGBT culture.